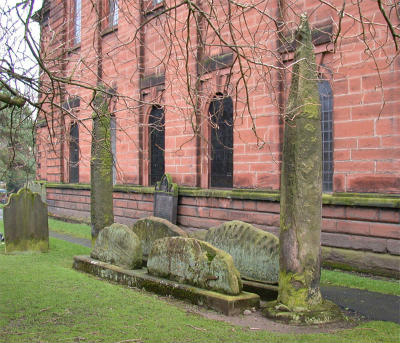 Describing the over-running of the greater part of Cumberland by the Danes in the tenth century, “Ewanian” introduces history of the “Giant’s Grave” in St. Andrew’s Churchyard…

“The ancient monument on the north side of the parish church, consisting of two upright columns ten to eleven feet high and fifteen feet apart, with four semicircular stones with flat bases between, belong to this period. All the stones have been covered with a profusion of ornament, but time has to a very large extend effaced the figures and tracery which formally adorned these stones, yet on the north side on one stone two serpents and a human figure are traceable, presumably representing the bruising of the serpent’s head, whilst on the south side another stone bears on its face Greek, Runic and Roman tracery, in lines below one another. Probably these two stones, at some distant date, formed but one stone, back and front. On the east column a human figure is so far obliterated that no definite idea can be formed as to its intended meaning; but both of these columns have been in the form of crosses in the distant past, though now almost beyond recognising as such. The form of crosses thus manifests and determines that the monument is of Christian origin. The period to which it belongs, like that of its neighbour, the “Giant’s Thumb”, is difficult to determine. The once beautiful sculptures, which have adorned these monuments, might lead to us to believe they had been the work of the Romans were they evacuated the neighbouring fort of Brocavum; that the old churchyard cross marked the place of assembly of the congregation which met to hear St. Ninian, and that the grave might be the place of sepulchre of some noble Roman, who had became a Christian through the preaching of St. Ninian. Some colour is given to this idea from the similarity of the sculpture on the two monuments. 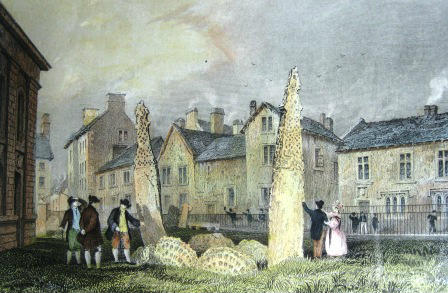 Walker, in his History of Penrith (1857), says “The traditional name of the ‘Giant’s Grave’, identical in meaning with the ‘Hemps’ graves and the ‘Kemp How’ of other parts of these counties, was commonly applied to the Danish burial grounds of a certain period,-- which were made to contain a number of bodies,--simply on account of their extraordinary size. We may conclude, therefore, judging from its position and size, that the grave is family burial place, and belongs to the Dano-Celtic period that preceded the breaking in of English laws under the Norman kings, but that the family must have been extinct before the name was conferred. The name once given, tradition was not slow to connect the grave with the caves of the Eamont, and with a famous personage (Ewen Cæsarius) whose fame still filled this part of the county”.

Dr. Todd says: “The common vulgar report is that one Ewen or Owen Cæsarius, a very extraordinary person, famous in these parts for hunting and fighting, about fourteen hundred years ago, whom no hand but that off death could overcome, lies buried in this place. His stature, as the story says, was prodigious beyond that of the Patagonians, in South America, seventeen feet high, that the pillars at his head and feet denote it, and the four rough unpolished stones, betwixt, represent so many wild boars, which had the honour to be killed by this wonderful giant”.

Biship Gibson’s edition of Camden says: “It is said that they were in memory of one Ewain Cæsarius, knight, in old time, a famous warrior of great strength and stature, who lived in these parts and killed wild boars in the Forest of Inglewood”.

Bishop Luttleton, in Archaeologia, says: “Whatever, therefore this pillar (the Giant’s Thumb) may be, the Giant’s Grave is undoubtedly a sepulchral monument; but whether it is British, Roman, Saxon, or Danish is the question. That it is much too rude to be the work of the Romans, is evident; and with regard to the Saxons, I know of no monument of this kind remaining in England which was ever attributed to this people. It must then be either British or Danish”. After describing the British monuments of the neighbourhood, he says: “Its being denominated the Giant’s Grave is perhaps in circumstance which strengthens the opinion of the monument being British.”

Sandford’s MS. Refers to a stranger gentleman visiting Penrith who invited Mr. Page to sup with him, and who produced and read a paper about this monument. The statement goes on to say that the place “was opened when I was a Scollar there, by William Turner, and there found the great long shank bones and other bones of a man, and a broad Sword besides.”

In 1720 when the church was rebuilt, the churchwardens ordered the demolition of the monument, and the large stones were about to be used in the construction of a culvert, but the indignant wrath of the inhabitants of the town arrested their Vandalism, and compelled them to re-place the stones. Two of the side stones were broken, and had to be clamped together with iron.

The conclusion to be drawn from these statements is that it is either a family burial place, or that it is the tomb of some important personage. Traditions are not always to be despised as untrustworthy, they may point and lead to true solutions, and in this case, linking general tradition on to the story by Sandford, and the sculptures on the stones, we come near the probability of face, and that fact the interment of a great military chief—a ruler—of giant stature; and that military chief or ruler living in the period immediately following the evacuation of the country by the Romans, and the chief bearing a semi-Roman semi-Celtic name seems to us to confirm our conclusions.”